On October 16, 1758, Noah Webster, Jr. was born in Hartford, Connecticut.  Webster graduated from Yale College in 1778, and passed the bar soon thereafter.  After he was unsuccessful in finding work as a lawyer, he turned his focus to education – specifically, lexicography. 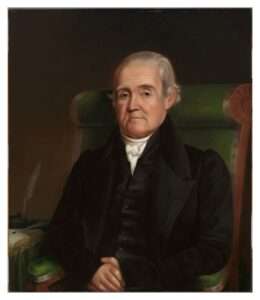 In 1783, Webster published the first of three volumes of his first work “A Grammatical Institute of the English Language.”  The work sold many copies, as it became a standard textbook in most schools. However, Webster saw little money from those sales.  This lack of profit was due in part to the absence of a federal copyright law – as the volumes could be reproduced by any printer, few people actually purchased them from Webster.

In an effort to profit from possible future works, Webster lobbied the new United States Congress to pass a federal copyright law.  Congress passed the First Copyright Act on May 31, 1790.  The Act amended Section 8 of Article 1 of the United States Constitution, reserved for the Powers of Congress, adding the responsibility to “promote the progress of science and useful arts, by securing limited times to authors and inventors the exclusive right to their respective writings and discoveries.”  The first copyrights could only be issued to books, maps, and charts and lasted fourteen years.  Works were registered in the U.S. District Court of the state where the author or creator lived. 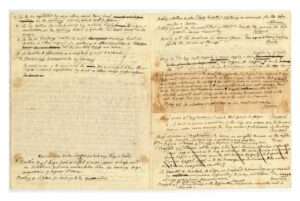 Webster published his magnum opus, “An American Dictionary of the English Language” in two volumes in 1828.  The work included 70,000 words, including curse words.  Some were critical of Webster’s inclusion of vulgar words such as “buggery,” but he noted that he took out other similar words such as “bum” and “fart.” 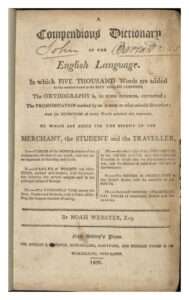 In an effort to further protect his works, Webster lobbied for a longer copyright term. In 1831, Congress extended the copyright term from fourteen to twenty-eight years.

Webster died in 1843, while working on the second version of his “An American Dictionary of the English Language.”  George and Charles Merriam, who operated a printing and bookselling business in Springfield, Massachusetts, obtained the rights to created revised versions of Webster’s first and second versions of the dictionary, creating the Merriam-Webster name we know today.